We, like the rocks are shaped by the slow but inexorable drip of time that hollows us, gentles rough edges and in some rare times, cleaves us apart, laying bare our center, split open by the extreme elements of our lives. It is sudden and irreversible.

28 years ago, I traveled from the United States to Prague as part of a larger European re-acquaintance. One of my closest girlfriends was Czech and I was visiting her in her birth town. We shared a similar European past although at the time I did not know just how similar our pasts and how intertwined our stories.

While in Prague, it had been my intention to visit the famous cemetery that was attached to the oldest Jewish synagogue in Europe. The synagogue permanently hosted the much acclaimed exhibition of “Children’s art from Theresienstadt” which attracted me, even through I had been avoidant of all things that harkened back to Holocaust history, which felt enshrined in a temple of unbearable suffering. I was fearful that anyone who entered such a place would inevitably, like Lot, be struck dumb or turned to tear.

I had in fact been so resistant to my parent’s past, that I actually refused to visit my mother’s childhood home, even when both she and I found ourselves in Hamburg, Germany at the same time. A refusal that today I deeply regret, but the habit of shutting my ears and heart to my mother’s terrified flight from Nazi Germany, and all she had been forced to leave behind, had been relegated to an sealed chamber of my life, keeping it and her at safe distance. This excursion was my first big venture into territory that felt distinctly unsafe.

Meandering through the narrow cobbled streets, I arrived at a worn but unimposing wrought iron gate at 4:50pm, only to discover that the cemetery closed at 5:00. People were leaving the building and moving back out towards the exit. Unsurprisingly, I found myself moving against the flow.

I persuaded the kindly docent manning the entrance by telling her that I had come all the way from the US and that I would be leaving the next morning. Five minutes she told me. Five minutes that changed my life.

The upper synagogue chamber had been converted into a little museum of simple children’s drawings. Most of the drawings that I was able to see in the very short time allotted to me were of ordinary life: family, house, animals, furniture, food, animals, trees, flowers, sun and moons. Ordinary life, but not their life. They were in a concentration camp separated from everything they had committed to paper, to color and to paint.

Their particular concentration camp as I later learned, had used all the arts (including theirs) as a screen to show visitors, like the Red Cross or foreign dignitaries how humane the “Jewish Resettlement Program” was. It was a staged event and the day after the visitors left the musical instruments were taken away, the paints were packed up and the children marched back to their freezing overcrowded barracks, everyone was back in filthy prison clothes, back to the starvation, the separation, till the next show for the next round of visitors.

There was however a painter in the camp who had been a renowned artist prior to her incarceration, Friedl Dicke-Brandeis. She did continue to give the children art classes as part of a clandestine educational program for the children of Terezin, very few of which survived. Prior to her deportation to Auschwitz in 1944, Friedl Brandeis gathered and hid all the drawings that the children had done in the two years of secret classes, about 4,500 in total.

In that hell, so many painted the world they had left behind, the stuff of ordinary life, before they were prisoners stripped of comfort and family,
what they had remembered from a prior time, or what they most yearned for now. What seemed apparent to me was that ‘heaven’ on earth was the small, the simple and the every day. The very stuff we take completely for granted, so completely ordinary that we do not pay much attention, as we march to all corners of the planet seeking the extra.

When we are stripped bare however, it is the rituals and rhythms of everyday life that are the most alluring and enduring: the comforts of the familiar, the love that is shared in how we live around and for each other; the preparation of a shared meal, a favorite chair in front of a fire, the blossoming mock orange tree in the yard, the order we make as we create home, the animals we care for, the elders that we tend to and learn from, the children we love and nurture, the art we create, the gardens we turn, the forests we walk in, the endless sky.

I am ushered out sobbing before the gates are locked for the night. The same kindly docent who admitted me, is now patting me reassuringly as you would a forlorn puppy, murmuring softly, ‘You do not need to cry’. ‘I do need to cry,’ I tell her as I looked into her eyes, eyes that had seen things I could barely imagine, yet still held kindness. I do need to cry for the immense cruelty we inflict upon each other, for looking away when the going got too tough, for decades of my family and people’s history I kept at arm’s length, so fearful that their pain would consume me, as it had contorted them in unshed grief or guilt.

It was only after this experience that I discovered that Alice, my maternal grand mother had been imprisoned and died in this particular concentration camp and at the same time, it turns out, as the grandparents of my Czechoslovakian friend whom I had been visiting. Did they know each other? Had they ever spoken? Had they ever spoken of their former lives, of the children they left behind?

We seem to yearn for the ‘extra’ even though the ordinary has all the makings of heaven on earth, if we take the time to feel; the rub of clean sheets against our bare skins, the taste of mango in the morning, of hot tea made from fresh herbs, of the looks in our beloved’s eyes, whether that beloved is a friend, a mate or an animal, the sound of trees whispering to each other with every gust of breeze, I could go on and on and on, but I’d rather leave you dear reader, to feel whatever is in your gracious now, your gracious heavenly ordinary. All the extra’s are undoubtedly already bejeweled within them.

May your summer be ripe and rich with ordinary magic! 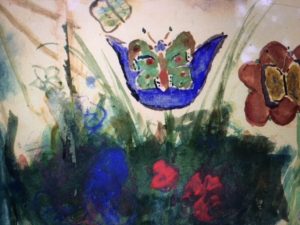 in Prague,
the Jewish cemetery
showed art from Theresienstadt
where my grandmother Alice died.
where children were forced to sit
in cold halls and ordered to paint
as if they were merely children.

they painted blessed ordinary life, before.
they drew parents, eating at table, dog under
foot, bread and meat in bowls, siblings gathered
around fire’s radiance, elders, beds, books and toys.

they dipped their brushes with trembling icy fingers into
the bold reds of love, the blues of sky, the greens of living,
the yellow of flowers, to remember and forget
all that was taken broken beyond hope or repair

even in my tenderest dreams
i would not have imagined
that words strung together
could make a necklace
worn to remember
the beauty, awe
and horror of
this world

it is endlessly long, bright, heavy
it wraps around the world
sparkles with the light of memory
rattles the earth, strung forever
through our bones.